Nain is a small town of only some 25,000 people and their initiation into rug weaving came later than in most other parts of Iran. However Isfahan, which has a long and rich history of rug design and weaving is only 85 miles away. When some artists in Nain realized how lucrative weaving had become, they began weaving Isfahan rugs in Nain in the 1920s. It wasn’t until the mid-1930s, after the decline of cloth weaving in the town, that Nain developed its own style and brand, so to speak. Suddenly, Nain rugs became very popular exports.

Characterized by natural ivory color backgrounds paired with often subdued blue accents, they were popular even in the United States, especially in the 60s and 70s. Fathollah Habibian, who died in 1995, is the generally considered the father of Nain rugs. He began weaving with his brother Mohammad when they were school children. Their workshop is renowned for consistently creating Nain carpets of the highest quality to this day. 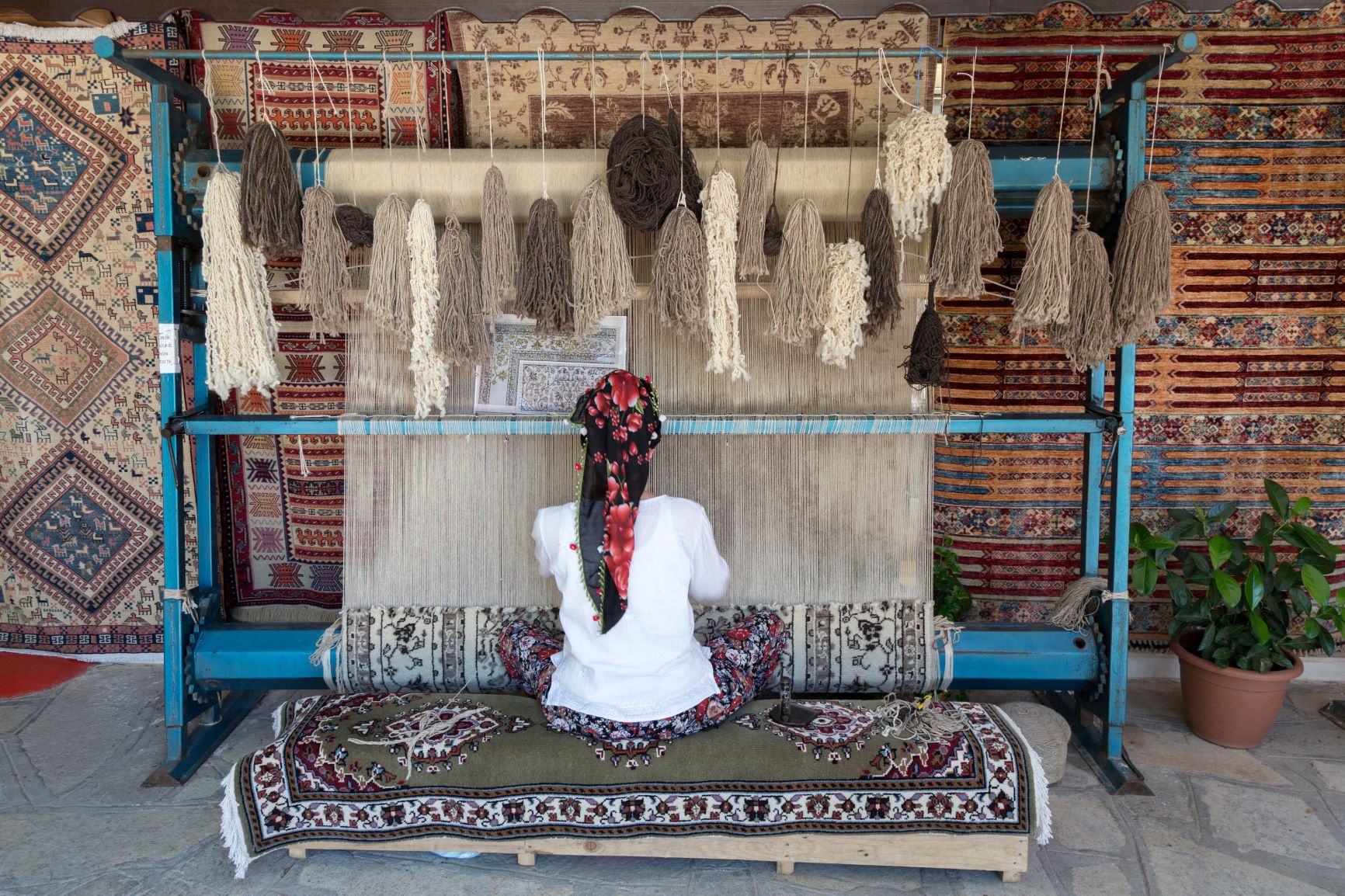 Nain rugs are hand woven on traditional looms using the typical Persian asymmetric knot. The finest tightly woven pieces often use delicate silk for the stationary longitudinal warp threads. This allows for smaller knots. High quality wool is also used. The transverse weft is generally exceptional wool accented with silk. In these rugs, the pile is always clipped short. The knot density can reach up to 700 KPSI (knots per square inch), which is extremely fine quality.

Nain rug design is intricately delicate, not unlike Isfahan rugs, but with thinner curvilinear details. Repeated patterns of symmetrical florals feature an arrangement of scrolling and interlacing foliage. The foliage sometimes encompasses a central medallion. The arabesque designs are often integrated with other repeated details such as birds, forest animals, and exotic fruits. In addition to Habibian Nain rugs, another rare Nain are the Tuteshk, which are also made with exceptional craftsmanship.

One of the characteristics of Nain rugs that sets them apart from other village rugs, other than their exceptional quality, is their color. The background is more often than not a very natural ivory or cream. This base color is accented with various muted tans and browns and minimal highlights of color, the most common being blue. Occasionally the highlight color paired with the cream is deep cranberry red, and even rarer green or yellow. The understated colors allow the design to break through.

Nain rugs have a quality classification system specific to rugs woven in Nain. They are separated into three categories of quality referred to in Persian as “la,” which translates to “layer.” It indicates the number of threads used in each warp layer in weaving the carpet. The lower the number the smaller the knots and the higher the density and quality.

The categories are 4-La, 6-La, and 9-La. It’s fairly simple to determine the number of layers by inspecting the fringe and counting the number of threads in each grouping. The finest Nain rugs are 4-La and are considered exclusive quality. They have a knot density of up to 700 KPSI and are extremely difficult to find today. 6-La is considered extra fine quality and 9-La is considered good quality because even the least densely woven Nain, is still much finer than village Persian rugs. 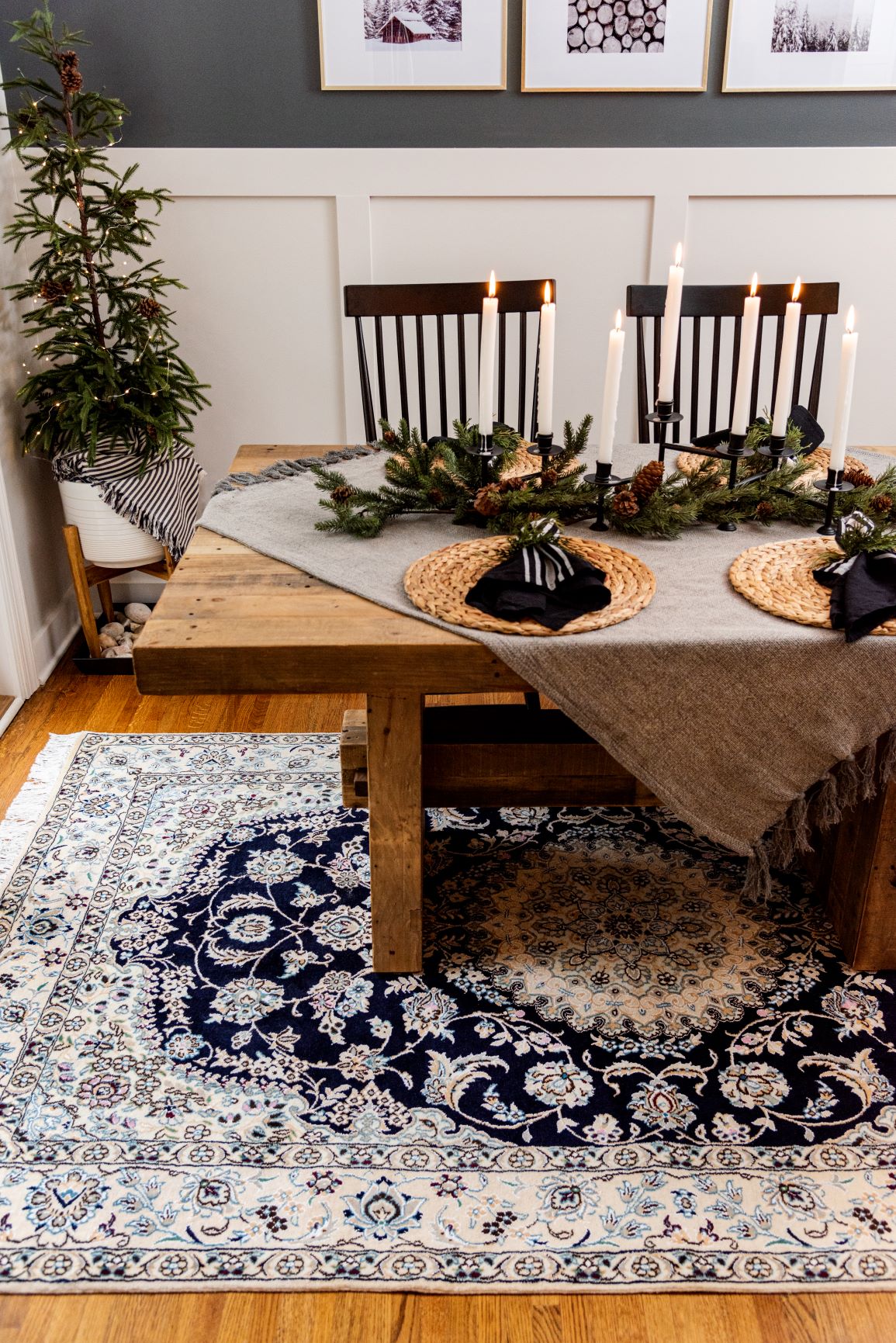 In addition to gaining a following in Europe, beginning about 50 to 60 years ago Nain carpets became very popular in the United States. This was not the case for other types of Persian rugs such as Kerman, Hamadan, Kashan, or Tabriz. The popularity of the Nain the world over is due to its understated colors combined with delicate yet complicated floral patterns. Nain rugs always bring a classy touch to any room, without bringing too much attention to themselves like their flashier bright red and blue Persian cousins.

As part of dining room decor, an all-over Shah Abbas design Nain rug instantly adds sophistication and elegance under even a basic dining table. Living rooms accented with a slightly warmer hued Islimi design Nain, maintain a focal point without overpowering other elements in the room.

Many Nain rugs found today were made after 1945. Although the caliber has diminished slightly, Nain carpets are still very high quality specimens. Even if the major weavers have lowered their standards some, out of necessity. When you start at the highest level, you can afford to drop down a notch or two and still remain exceptional.